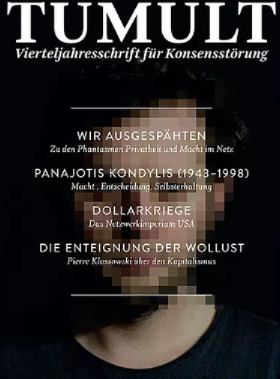 „The only patriotism that does not alienate us from the West is a constitutional patriotism.“
(Jürgen Habermas)
#31er

„In Krahl, there dwell the wolves.“ Theodor W. Adorno

Theodor W. Adorno wrote the resignation essay because of Krahl’s criticism that critical theory had become incapable of action due to its postwar pessimism. Adorno died from the pressure caused by the dispute with his students on the Matterhorn in Switzerland. Krahl died a short time later in a traffic accident. Subsequently, the anti-authoritarian movement merged with the Maoist left. This process gave rise to left-wing fascists like the RAF or Bommi Baumann.
Meanwhile, the average subject of the overall society in Western Europe evolved from authoritarian characters to consumer-driven victims of the culture industry. The libidinous drives liberated by the 68er movement entered from now on into the service of the administered world. The psychology of the bourgeois subject, who had to strictly suppress his sexual drives, and therefore turned the violence he had to do to himself outward, was sublated in the urge to consume.
Already Edward Bernays knew that „Sex Sells“:
„The child […] constitutes […] a new form of greatest ego weakness, which no longer means a trapped, threatened ego as in the authoritarian, sadomasochistic psyche, but a dissolving, diffuse, boundless ego, which for this very reason can only keep an eye on its own interests, whereby the egoistic interest is identical with that of consumer society.“
(Frank Böckelmann, The bad sublation of the authoritarian personality)
The bourgeois women, the suffragettes, whom Rosa Luxemburg rightly despised*, fell for the combination of Freud’s mass psychology, sexual theory, and the needs of the culture industry even well before World War II. That was, still during the authoritarian character period in Central Europe, which has since shifted to the MENA region.
Meanwhile, the very same Adornite Frank Böckelman is so disillusioned that, after a brief period with the anti-imperialists and an interesting classic of the critique of political correctness, he is now promoting Björn Höcke.
Laemmergeier.info considers Höcke a fascist, but Alice Weidel is indeed interesting.
Why is a lesbian member of a party where some right-wing conservatives would rather ban her lifestyle (foreign life partner, illegal refugee as cleaning lady) today than tomorrow? Because millions of homophobic Arabs are flooding into the country?

*Proletarian women had nothing to gain since they had to work anyway and no money to turn into political influence (Cf. Testing Theories of American Politics: Elites, Interest Groups, and Average Citizens). The suffragettes – bourgeois-rich women – did not want to go into the factories. They wanted to become journalists and professors, while Rosa Luxemburg and Clara Zetkin knew that the true liberation of women could only exist if it would also liberate the proletarian man.
After the bourgeois woman had emancipated herself, proletarian women could finally afford the lifestyle of the bourgeois small family, which was oriented to the habitus of the upper class: House, car, dog, wife behind the stove, through Fordism and the assembly line.
This model was then again challenged by the second women’s movement in the 1960s (Cf. Henryk M. Broder – Who is afraid of pornography? A porn report). Even previously, National Socialism had disrupted the values of Catholicism (Cf. Kirchheimer summary). In any case: The ’68 revolution aimed at a sexual liberation that overshot the mark. Communes and polygamy fit hedonistic fun society, while miniskirts instead of burqas actually create an emancipatory potential. Laemmergeier.info stands somewhere between Rosa Luxemburg and moderate second-wave difference feminism.
Having said that, one can cynically blame the 68er movement, which is not exclusively bad, for the fact that the proletarian woman is today – in the midst of a society of overproduction – forced to go back to work (Cf. Carl Bernstein – THE CIA AND THE MEDIA).

Open letter to Jürgen Elsässer:
Dear Mr. Elsässer,
I would love to debate with you Bommi Baumann, Frank Böckelmann & Justus Wertmüller. Elaborating the differences and similarities in their life paths and theoretical backgrounds (including your own) would be an honor for me:
From Adorno to Höcke?
Best
Ju

Open letter to Frank Böckelmann:
Hello Frank,
I have enjoyed your essays immensely. Unfortunately, meanwhile, I am puzzled by your adoration of Höcke, but I can understand it, albeit not accept it.
Best
J